The reauthorization of the Magnuson-Stevens Fishery Conservation & Management Act that will dictate management of our nation’s fisheries for years to come is currently working its way through Congress. Much of the debate has focused on the effort to add more “flexibility” to rebuilding timelines (although some flexibility already exists in the act). Unfortunately, a lot of other and, in my opinion, more pressing issues are receiving little to no attention. This is the second in a series of blog posts that will highlight some of the issues I feel should be addressed in the next version of this important legislation.

On November 9, the Mid-Atlantic Fishery Management Council (MAFMC) took another step toward bringing reasonable protection of unmanaged forage species to the East Coast. There are two similar, but different, actions already in place on the West Coast. First and foremost, kudos to the MAFMC for taking on this important issue, and please keep up the good work! 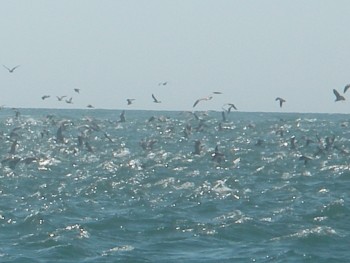 The generic concept behind these “unmanaged forage” actions is simple. Before a new fishery (that targets a forage species) can begin, managers must have a reasonable understanding of not only the sustainability of the target species, but also the new fishery’s impact on existing fisheries and its impact on the overall ecosystem. Managers wouldn’t want to allow new harvest of a forage species if there was a chance that without this species, an existing species would be affected in a way that another fishery would collapse. There is also the not-so-small issue of who pays to manage a new fishery. Just because “XYZ Corporation” wants to harvest the next super food or nutritional supplement, the taxpayer-funded National Marine Fisheries Service should not be required to pay for the research, monitoring and stock assessments that are all needed to manage a fishery.

Regulators and managers should make the process of developing new forage fisheries easily understood. XYZ Corporation must know what is required and expected before it invests in vessels, processing facilities and staff. If these questions are not answered up front, we risk another group of employees sitting in yet another complicated management meeting wondering why the government is considering actions that will put their jobs in danger. When it gets to that point it becomes about collateral damage; the politicians have to bail out another fishery and, once again, the problem is not addressed within a flawed system.

The MAFMC and those West Coast actions propose a better way to do NEW business. Once a new fishery is proposed, managers should work with industry using tools like the experimental fisheries permit (EFP) to proceed with caution. Once initial data is collected and analyzed, impacts can be predicted so that sustainable regulations and responsibilities for funding can be developed. That is how to launch a new long-term fishery that will sustain jobs and contribute to the economy. 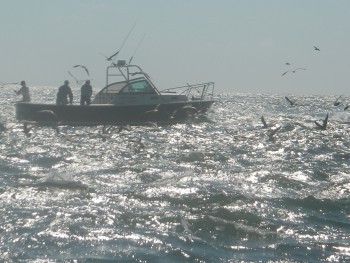 “Something eats everything and almost nothing eats just one thing.”

Unfortunately, this is not how it works in most of the US Fishery Management Councils. The current process is a bit like the Wild West. Industry goes fishing and management only kicks in when the target species meets a specific list of criteria designating that species to be in need of “conservation & management” according to the Magnuson-Stevens Fishery Conservation & Management Act. Then starts the endless cycle of fighting over science and monitoring, followed by lawyers from all sides challenging the process, followed by the same old same old, all the while the taxpayers are wasting money and, most importantly, our natural resources are often misused, if not squandered.

I feel this is a valid subject to be included in a reauthorized Magnuson-Stevens Fishery Conservation & Management Act. Two West Coast councils and one East Coast council are already acting on the issues. That alone should mean consideration by Congress is warranted. Can we at least agree that this is a more valid debate than yet another discussion on the latest attempt to weaken rebuilding timelines that, by the way, are working more often than not?

Also, while we are at it, can someone explain to me why this concept does not apply to all fisheries and has only been focused on forage species?

One thing that both surprised me and was made clear to me during the MAFMC process thus far is that to define a forage species for regulation is extremely difficult. Yes, I know that a forage species is when I encounter one, BUT when using actual science to craft understandable regulations that matter, the simple fact is that: Something eats everything and almost nothing eats just one thing.

My way to end the struggle to define a forage species is easy. Expand the concepts of this action to include all species, plants and organisms within the marine environment.

I’ll leave you with this. On my 20-foot boat, I have a 9-inch sonar unit that costs less than $1000. That unit shows me a virtual black and white image of everything below my boat to a depth of 600 feet and out to either side for 240 feet. I see stages of the tide, get readings on the current flow, temperature of air and water and for a few bucks more the data is endless. All this on my 20-foot, 1984 $16K vessel. You should see the former $200K, 29-foot center-console spaceship on which I used to run charters.

The point I am trying to make is that in today’s world, humans run the planet. The species we target don’t have a shot unless WE take care of them. Efficiency in fishing gear and ever-improving technology is a good thing. The most obvious first move from where we are today must be to ensure that any new fishery is developed slowly, responsibly and sustainably with the cost of management falling on those that will profit from our natural resources.