Some four miles due west of San Diego, the largest proposed fish farm in the U.S. aims to add up to 11 million pounds of tuna and sea bass to the seafood market. The project’s boosters claim the aquaculture enterprise, Rose Canyon Fisheries, is a model of sustainability for the American seafood market. They cite ample space for the fish, a habitat that mimics the natural environment, and sustainable planning from farm to table built right into the project as reasons why Rose Canyon is an undertaking to be emulated nationwide. 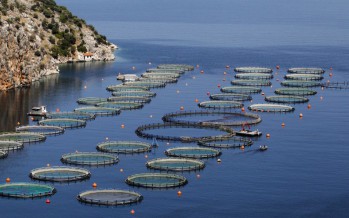 But behind the rosy façade of corporate public relations, the project is already drawing fire. The problems with Rose Canyon are more or less inherent in all open-ocean fin-fish aquaculture operations.

These problems include spreading disease and parasites from escaped fish. Opponents have also pointed out that aquaculture has a negligible effect on reducing pressures on wild fish populations, as a large proportion of the feed for farmed seafood comes from wild-caught marine species.

The problem is not with aquaculture as a business model so much as with ensuring environmental stewardship as a foundational goal of seafood production. For example, there’s no need to fish with dynamite when a hook works just as well.

The easy answer is that we need to concentrate our markets on sustaining the families of the small-boat commercial fishing industry that sustainably harvests American seafood. And although that industry is constantly under pressure, because of climate change, pollution, resource allocation and unnecessary regulatory barriers such as 100% observer coverage in certain fisheries, it is an industry and a culture that is worth fighting for. American fishermen are among the earliest conservationists, with a deep understanding that stewarding the natural resources that sustain their livelihoods is the best way to bring a quality product to market at a fair price.

But that may not be enough. Demand for seafood continues to rise even as major seafood stocks are threatened, and the commercial fleet continues to deal with crises that threaten their existence.

Aquaculture may be a supplemental part of the answer. The problem is that open ocean aquaculture doesn’t require operators to internalize so many of the costs associated with offshore net pen operations: the disease transfer, the escapes, and the pollution.

Imagine a closed system from which fish escapes are all but impossible. Farm water is cleaned and recycled onsite so that pollutants are collected and dealt with, rather than simply drifting into the sea. Save for intentional human malevolence, fish from these farms could not infiltrate wild genomes and compromise their survival. And these plants could be located anywhere, reducing the carbon footprint of fish farming by limiting transportation requirements.

These farms exist, and the disease issues they deal with are proof that if you’re going to farm fish, doing it onshore is the only sustainable choice.

A Future of Farms?

American ingenuity is champing at the bit to take advantage of the new rules permitting fin fish farms in the Gulf of Mexico, so as to meet demand and to keep America competitive in the world market. And increasing the share of farmed fish that comes from the U.S. can be an important part of the fight for addressing the world’s appetites and keeping oceans healthy.

Yet running roughshod over sustainability concerns is not the best way to do it, and it may be that massive, open-water farming operations can never be done in such a way as to safeguard the health of marine ecosystems.

In some ways, the conundrum we face in regards to farmed fish is similar to traditional livestock farming. Do we want seafood that comes from small, artisanal producers of sustainable, wild food, or are we subject to the convenience of industrial-scale production in concentrated feedlots? Will we turn a blind eye to practices that poison our waters as high-density farming poisons our lands? Or will we instead honor the heritage of generations of family fishermen, passing on their ethics and respect for clean ocean waters to a new generation of floating farms?

Evan Wynns is a law and policy clerk at the Institute for Fisheries Resources, and its sister organization, the Pacific Coast Federation of Fishermen’s Associations, where he performs research and advocacy work on behalf of small-boat commercial fishermen.
View all posts by Evan Wynns →