These days, even the most novice striped bass anglers understand that harvest of striped bass in “federal” waters (from three miles out to 200) is against the law.

Such area has been designated as the Exclusive Economic Zone (EEZ). It’s been closed to striped bass fishing since 1990, when a federal moratorium was put in place to protect new year classes entering the spawning population and to help with the rebuilding of a resource recovering from a couple of decades of overfishing.

Yet, I feel like only recently do people get it. That’s likely do to several broadly publicized enforcement actions, some of which were quite serious, as well as outreach by the Coast Guard and NOAA Fisheries and the advent of, ehm, online bloggers yapping about it. 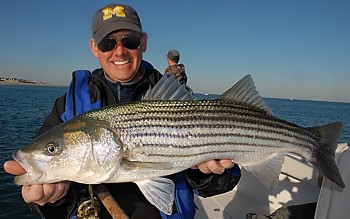 In 2006, NOAA Fisheries re-evaluated the federal ban. After receiving approximately 8,500 comments, almost all supporting a continued closure, the agency decided to maintain the moratorium to ensure fishing pressure did not increase. Today it effectively serves as a badly need buffer for an adult striped bass population. Outside of three miles, stripers are temporarily protected from the sometimes immense pressure they face in state waters.

Yet, there are some states that would absolutely like to see federal waters off their coast open to striped bass fishing, particularly Virginia and North Carolina, where a large portion of the striped bass stock overwinters. New York is not without blame; in 2012 and then again this summer, bills were introduced in Congress to open federal waters between Montauk Point, Block Island and Point Judith.

The EEZ is clearly delineated on nautical charts and GPS maps, which indicate a boundary that lies three miles off of relevant points of land in those three states. Because Block Island is approximately nine miles from Rhode Island, and fourteen miles from Montauk Point, there is a large swath of water between Montauk, Block and Pt. Judith — approximately 155 square miles — that is indeed federal water. And, well, just about every serious angler knows that such water, usually from June to October, holds A LOT of striped bass. Generally large ones, too.

While it is legal to be in possession of striped bass in such “transit zones,” while steaming between Block Island and Montauk or other nearby ports — a revision made in 2005 — anglers may not actively fish for stripers in such area. However, if the most recent bill, HR 3070: EEZ Clarification Act, were to pass, recreational fishing for striped bass would be allowed in the “transit zone.” 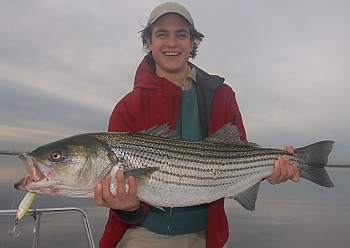 “So what, we’re just opening a small area between points of land,” you might be thinking. But keep in mind, we’re not talking about making a “small” concession here. We’re talking about 155 square miles of what is really prime striped bass habitat, particularly for those older larger, fecund females, in close proximity to some of the biggest recreational and commercial fishing ports on the East Coast.

If such an opening were to occur, A LOT more big fecund females would presumably end up hanging on dock hooks. And assuming you are a surfcaster, or light-tackle/fly-fisher or just a nearshore angler, you’ll continue to be left, rod in hand, scratching your head and wondering what happened to all those blitzes that used to define the Montauk surf.

Now, as far as I know, there has been no biological analysis conducted by NOAA Fisheries, ASMFC or other managing agency of what sort of impact this might have. I mean, that sort of analysis should be a requirement before considering anything like this. But really, I don’t know how it wouldn’t result in a significant increase in overall fishing mortality.

If you are taking the time to read this, I’m guessing you know that things are not exactly “rosy” with striped bass. The stock has been in steady decline since 2006. And while the last assessment found that it wasn’t quite yet overfished, such assessment clearly warned that it very well could become overfished in 2015. The last thing we should be considering at this point is a likely increase in fishing mortality.

Furthermore, any such regional opening would screw up a uniform and consistent EEZ closure along the striper coast. You can be damn certain that if such a law were to pass, MA, VA, NC etc., would be carving out their own preferred areas of the EEZ to open. And there would be justification. “If New York can do it, then we should be able to also.”

And while the EEZ was closed to commercial striped bass fishing pursuant to an executive order issued by President George W. Bush, it’s not unreasonable to think that any an EEZ opening might initiate an effort to allow commercial fishing in federal waters, too.

Uhm, if you get a chart out and actually draw those lines, you’ll see that it cuts off the entire southeast corner of Block Island. That means that technically, if you were to be fishing from the beach at, say, Sand Bank, or Cat Rock, you’d be doing so illegally. Not sure how the sponsors of the bill overlooked such a thing, but it clearly points to the lack of thought that went into this thing.

In short, the EEZ moratorium is and has been an important component of striped bass conservation efforts, keeping fishing mortality down, particularly on those older large fish that compose the spawning stock, and appear to frequent federal waters. Such a closure has over the years, without question, helped to protect the striped bass resource.

We should make it clear to our Congressional Representatives that we shouldn’t be messing with it.

The Montauk party/charter fleet is arguing that such a regional opening would provide economic benefits. Perhaps it might. But the larger question is whether such potential economic benefits, for what appears to be a narrow special interest, trump the long-term health of a public resource? And should those fish be available to such special interests at the expense of the great majority of anglers, particularly those surfcasters and near-shore fishermen?

The answer seems pretty simple to me.