I had to look up who said that and learned it was Tip O’ Neill, former Speaker of the House. Not that it makes any difference, but I thought I’d provide a brief history lesson while I’m in Washington D.C. 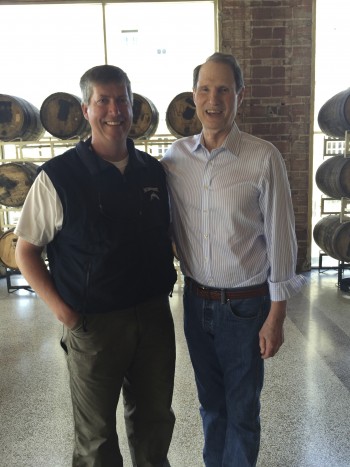 This Photo and Above: Senator Ron Wyden on a summer trip in Oregon.

I find Washington, DC pretty far removed from my more natural habitat on the water. It’s all concrete here, and there are no salmon. I’m on the banks of Chesapeake Bay right now and wow, do we have it good on the Oregon Coast! This estuary is a mess but the passion still exists to clean it up and protect it.

I make several trips to Washington, DC every year it seems. Visiting the Oregon delegation is often a pleasure to me for some strange reason; I guess having Congressional or Senate staff, or on occasion the representatives themselves, hear your concerns makes you feel pretty good! Maybe someone really is listening.

One reader wrote in several weeks ago about making these blogs political; that’s not something I shoot for. In the battle for a cleaner environment to produce healthier fish and healthy runs of fish, we can’t afford any enemies. We need champions on both sides of the aisle. But once you see the magnitude of concrete and steel in Washington DC, you see why salmon often get left out of the conversation.

I find myself continually asking my East Coast colleagues the same two questions when I come out here:

I seem to get a different answer each time, but today’s response was, “it depends on the species, but most people just practice catch and release.” And I learned that dam breaching on the East Coast is not difficult because they’re trying to restore salmon runs, but resistance comes more from folks that want to preserve a waterway, man-made or not, because that is where they learned to swim or fish. It’s a simple way of saying, we don’t have Atlantic salmon anymore, and there aren’t any left here to restore. I’ll say it again, we have it good in Oregon.

Being a 19-year fishing guide has provided incredible experiences for me. One of the greatest lessons my Dad taught me early in life is that you have to enjoy what you do. I’ve certainly had a great time at it, but punching away wildly at these computer keys while veering down at a steady stream of taillights in the city of Baltimore has its advantages when it’s raining, and in the case of my home waters, flooding. I get to exercise a different part of my brain here in the sausage-making factory known as Congress. 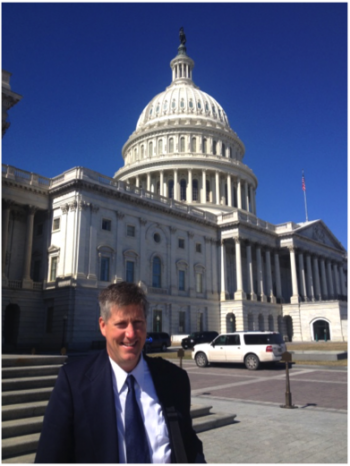 Bob Rees visiting his Members of Congress in Washington, DC

One thing is abundantly clear in these forays to the Capitol City; there aren’t a bunch of camo-wearing, rod-toting hunters and anglers walking these halls, and given my observations from around these parts, not many folks are taking their kids out to go fishing. Oh look at that, traffic is at a stand-still…

This is our greatest threat, not having the voices of hunters and anglers interjected into our conversations with Congress, and not educating and integrating the next generation of hunters and anglers. If we don’t have vocal stakeholders, other industries will vie for these natural resources.

What most in our community don’t realize is that these offices are very cordial and interested in hearing what you have to say. Admittedly, I’m not as effective as I used to be because they’re seeing me on a regular basis. Sure, I know the right keywords and phrases to say and know the issues fairly well, but until you come talk to your representatives, tell the stories of how you grew up fishing and what it means to your family or business, we’re rolled up into the stalemate of the process. While walking the halls of Congress is still exciting for me, we’ll always need the foot soldiers to give the rest of the story to the people in charge.

I have spent so much of my time and energy in recent history, fighting for what I believed the meaningful issues were – necessary improvements to the Forest Practices Act, dam breaching, predation by marine mammals and avian species – bluntly stating, let’s take care of what we’re responsible for in our fresh-water ecosystem alterations. The ocean will be the ocean, we have no control over that. It wasn’t but a few years later after making such crass statements that I learned how carbon pollution is acidifying our seas. The bottom line is, as much science around salmon that we have, we don’t even yet know, what we don’t know. This doesn’t bode well for the future of the species we care most about.

It’s not all doom however. Despite public polling for the favorability of Congress, many of our Senators and Representatives do listen to the people, especially if there are enough of us. There are many more battles to fight in the halls of Congress, including the reauthorization of the Magnuson Stevens Act. Won’t you join me in these conversations? Whether it’s in person, or by letter or email, us plain ol’ knee-high boot wearin’, Grunden bib sportin’ fishermen have a say in the decisions that go down in Congress. Join me sometime, and let’s go fishing for a real catch!

On a brighter note, which river do you think will produce the season’s first winter steelhead?