Some good indications that things may be on an upswing, but it certainly isn’t time to loosen the reins

I hesitate to say it’s over, because for a lot of us along the striper coast, to say such a thing would be blasphemy! Yeah, “it ain’t over till it’s over,” but for sure, most of us are starting to wind things down. So I wanna ask readers… How was your striped bass fishing this year? Tell me/us by leaving a comment below. 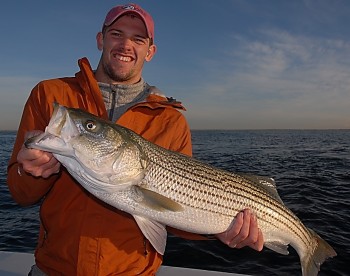 Honestly, mine wasn’t terrible… Not nearly as bad as I had expected it to be based on the prior years. That’s mostly because of a real resurgence of schoolies. In fact, there were more schoolies around in the spring and then again this fall than I’ve seen in well over a decade. Reminded me at times of how the fishing was in the early 2000s, when the bay was just full of them. I mean hell, I had a handful of 40-50 fish days! Sure, just schoolies, but of course there were some larger fish mixed in. Good stuff if you are a light tackle/flyfishing guide. In other words the striped bass fishery wasn’t dominated by the meat crowd, if ya know what I mean (if you are reading this I expect that you do).

I’ve actually spent the last few days talking to anglers and guides from Maine to Virginia for an article I’m working on for one of the big print pubs. Almost everyone that spends A LOT of time on the water is saying something similar. At some points in the season they were/are consistently seeing loads of schoolies. Yes, as has been the case in the last several years, there have been some good but brief runs of larger fish here and there, for example the (expletive)-show in Jersey right now on the bunker schools, but such scenarios sure as hell aren’t happening with any consistency along the striper coast.

I mean, it all makes sense. According to young-of-the-year survey conducted annually in the Chesapeake Bay, 2011 was the one real good year-class we’ve had since 2003. The rest? Average to well below average. (Note: 2015 appears to be a good one also, but I’ll get to that later).

Because approximately 80% of the coastal striped bass stock originates in the Chesapeake Bay, this is significant, and because those fish seemed to have left the bay this year (generally it takes them 3 or 4 years) I’m pretty sure that’s what most of us are seeing now. And those bigger fish all those anglers in Jersey are beating on right now? Likely the last of the 2003 class.

Another thing I’d note are all the 5-to-10″ fish we had in Jamaica Bay this year. There were a ton! Given their size, I can only assume these are fish spawned in the Hudson this year (the second largest spawning estuary on the coast). Although the data isn’t available yet, I suspect that the Hudson had good young-of-the-year production this spring.

Yes, this resurrection of the schoolie fishery is awesome. I actually don’t feel like shooting myself after most striper trips this year. But what exactly does it mean for the coastal stock? Are we out of the weeds?

I certainly don’t think so. Re the above, I’m only really talking about a few weeks in the spring and fall. There wasn’t much before them, and I don’t really expect there to be much after them.

I mean, we’re talking about one abundant year class (the 2011s). Yes, there are other less-abundant year classes mixed in, which of course makes fishing on these small fish interesting, as you never know when a larger fish is gonna strike, but those larger fish sure as hell aren’t abundant.

Indeed, the 2015 year class appears to be a pretty good one. But, even if it’s as good as they say it is, we won’t see those fish for probably another 4 years. Still, this of course is great news for the future of the fishery. But it sure as hell isn’t a reason to reverse the cuts that were made last year with Addendum IV.

Unsurprisingly, at the ASMFC meeting a few weeks ago, the Bay states (Maryland and Virginia) made a play to do exactly this. If you recall, they were the ones who fought the 25% reduction the hardest, because apparently everyone in their states will suffer if they can’t kill a ton of striped bass.

Without getting too much into the weeds, I have to mention here that the push to loosen the regs was also based on a 2015 Assessment Update. This incorporated 2013 and 2014 data, and somehow showed that there was now a 49% chance that the stock would be overfished by this year, instead of the prior 86% estimation. Why the big drop, I’m still not clear on, but from what I understand it had to do with a different projection model more than anything else. Charlie Witek explains it in detail in his latest striped bass blog post.

Fortunately the push didn’t succeed. From what I hear, there was little support (save for, ehm, Jersey), but it wasn’t altogether defeated either. It was tabled, so it could and likely will come up again. Instead, a motion was passed to rush an assessment update after the 2015 season, so we can first understand what the impact of the Addendum IV cuts was.

Certainly there’s no harm in this. And I for one will be interested to see whether or not the new measures (specifically going from a two- to a one-fish bag limit in most states) succeeded in keeping fishing mortality below the target and, more importantly, whether the stock ended up becoming “overfished” this year. The results of such an update will likely change the dynamic of where we go from here.

Yet regardless of that outcome, I think we really just need to stay the course with striped bass. Because like a lot of us have been saying all along, it’s darn important that we keep some fish in the water. Allowing/encouraging people to kill more fish before the ink is even dry on Addendum IV is just stupid, right?

We are most certainly not on easy street with stripers. It’s a fact that the great majority of years in the last decade have shown average to below-average spawns. The anomalous 2011 year class doesn’t change that. Nor does the 2015 above-average one. I want you to keep in mind that we had the LOWEST young-of-the-year index in the history of the survey (which dates back to 1957) in 2012. When you average out the index over the last decade, it ain’t great. And it doesn’t compare with the decade before — the boom years — in which many of us built what we thought were sustainable business models around striped bass.

But things aren’t all doom and gloom either. As Charlie Witek points out in his post, that decade leading up to the last collapse saw average young-of-the-year indices way below what we’re seeing now. So no… Despite what some people are saying, I DON’T think we’re on the verge of another collapse. Nor are we back to where I think things should be. In other words, I don’t think we’re gonna see things get much worse in the near future, but I don’ think things will get much better either. And really, we’re at the mercy of Mother Nature and whether or not she gives us good conditions for young-of-the-year production in the coming years. Given the changing climate, that’s a real wild card.

One would think reasonable people/reasonable managers would understand this, and proceed with caution… The kind federal law requires. But they come under A LOT of pressure from the kill-more folks. And unfortunately, striped bass aren’t managed by the feds, and, well, some of those state managers aren’t what I’d consider to be reasonable. I mean hey, the ASMFC hasn’t exactly acted with precaution in mind in the past.

So really, I think it’s going to be up to us — the rank-and-file striped bass angler, the light tackle guys, the surfcasters… All of us who need a healthy and abundant stock to be successful — to push back on those Bay States when they try and increase the number of fish they can kill. Because without us, striped bass — and all the businesses up and down the coast who benefit from striped bass abundance — have no one.

47 comments on “So, How Was Your Striped Bass Season?”