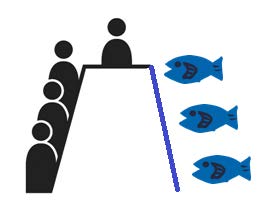 This blog post appears as part of our “Focus on Forage Fish” series, which highlights the importance of managing prey species for ocean ecosystems.

For those who think allocating Atlantic menhaden and other key prey species between fisheries and predators, without the use of highly-complex ecosystem models, would be “arbitrary,” think of it instead the way we view allocations of fish among competing fisheries. In other words, it’s arbitration.

The fishing industry and natural predators, competing for a valued prey species, come to the table to negotiate. The industry makes its opening bid, to maximize its catch on a continuing basis, which means something close to the “maximum sustainable yield.” The prey population that produces MSY is typically less than half (40-50%) of an un-fished population. The predators — striped bass and the others — counter that they can’t live with that, quite literally. They want to maximize food for themselves, too, and ask for something closer to an un-fished population. 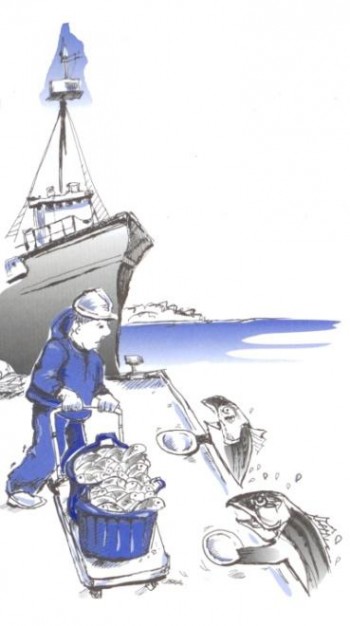 The arbitrator knows that choosing something in-between — a resource sharing arrangement that balances the needs of fishermen and predators, of society and the health of the ecosystem — is not something even the most sophisticated mathematical model can tell her; it is a subjective decision. She also knows that it’s her job to take the interests of each party into account. So she makes the only determination she can that will be fair to both sides, and that decision is to ask each party to meet the other half way. She proposes “the 75% solution” to sustain fishing in a way that also protects the broader ecosystem and its living communities.

In Resource Sharing: The Berkeley Criterion, a new 36-page publication from Wild Oceans, author Ken Hinman explains why we must fish for key prey species like menhaden as a part of the natural system, as one among many predators, and why what he calls “the 75% solution” — leaving three-quarters of the un-fished biomass in the ocean for ecosystem services — is becoming the consensus rule-of-thumb among fishery scientists all over the world for protecting the ecological role of key forage species.

“The future of fishing lies in the balance.”

Download a free copy of Resource Sharing at WildOceans.org.

Ken Hinman, president of Wild Oceans, has spent almost 40 years bringing fishermen and environmentalists together to protect the future of fishing.
View all posts by Ken Hinman →

3 comments on “Pass The Menhaden, Please!”