Menhaden have helped make me great memories throughout my guiding career, though those memories are becoming more distant and farther apart. I remember an early morning, guiding Randy and Rusty Walker. Standing firm and patient at the bow, my eyes searched the Indian River Lagoon’s calm coastal waters, waiting and watching for the giveaway flickers of menhaden tail. A heavy ten-foot cast net was draped partially over my shoulder and resting in my hands. Across the expanse, mature and juvenile tarpon, ranging from two to seven feet, rolled among the bait pods scattered about ahead of the boat. Brown pelicans — solo, in pairs, and threesomes — spiraled down from the sky with folded wings, projecting their pointed bills down on the bait pods closest to the surface. Lit by golden morning light, it was a stunningly beautiful scene. It was the type of morning that reminded me why I decided to be a fishing guide. 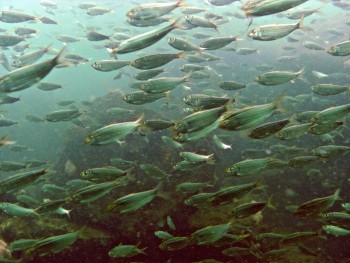 I just needed to throw my cast net over a school of pogies (menhaden are also known as pogy, mossbunker, or bunker), and we’d soon be in business. I saw a flash next to the boater’s starboard side and cast my net in its direction. I pulled the rope to close the net and began to retrieve it, feeling the menhaden’s panicked energy furiously shaking the net. Blackened with live pogies, I encouraged Randy and Rusty to bait up. Within seconds of dropping the catch into our baitwell, their lines were in the water. Within a few minutes, both of their rods were bent and their drags screamed as tarpon vaulted into the air. We caught so many big snook and tarpon that day, none of us will ever forget it.

Veteran anglers like me still look forward to days like that, but are more careful these days of getting our hopes up. When a seasonal run of these water-filtering, forage fish arrives in Florida’s waters, they attract large numbers of the game fish that make this state the Fishing Capital of the World. We realize how important menhaden are to the survival of many of our favorite species, and we are worried by how woefully depleted these populations are down here.

For decades, conservation-minded anglers and other nature lovers have recognized that menhaden are far more valuable left alive in the water than for use as fertilizer, fish oil supplements, or for use in any of the other products for which they’ve been taken from the sea by untold tons. Despite our protestations, industrial fishing interests have succeeded in overfishing the Atlantic population to the point that that the sizes of the population, the sizes of the individual fish, and the range of their migrations have radically shrunk.

Because of the profound importance of menhaden to many of Florida’s most valuable species, the consequences of allowing them to become so depleted are borne by recreational and commercial fishermen here and in the other states along the southern extent of the species’ range. Think about how menhaden support diverse inshore and offshore fisheries. The “peanuts” maturing in the estuaries provide essential nutrition for just about every species we target inshore, including flounder, red drum, tarpon, snook, and spotted sea trout. Those predators rely on this easy source of high-quality nutrition to grow quickly enough to avoid being “bait” themselves, and to produce viable eggs. If the menhaden aren’t there, or present in sufficient numbers, they must shift to feeding on harder-to-catch, less nutritious forage sources.

Coastal pelagic and pelagic species also rely heavily on menhaden. When we can find the pogies along the beaches, we encounter numerous species of sharks, king and Spanish mackerel, bluefish, bonita, barracuda, and jack crevalle. Back when large shoals of menhaden moved offshore, presumably to spawn, bluewater anglers would catch the tunas, billfish, and dolphin that balled the shoals into terrified schools. We want those days back.

Fortunately, today’s fishery managers better understand the critical importance of menhaden for being both a water-filtering species and a forage fish, providing food to many game fish, marine birds, and marine mammals. In 2012, the Atlantic States Marine Fisheries Commission finally cut the menhaden harvest by 25 percent, a decision that seems to be improving the population in the heart of its range, in the coastal waters in and off Chesapeake and Delaware bays. We are hopeful that in time, if the ASFMC stays the course, we will have healthy menhaden populations here in the South again.

In May of this year, ASMFC made more progress toward fair and sustainable coast-wide menhaden management. Though they increased harvest slightly, they also began moving toward an ecosystem approach to managing this most important of forage fish. They voted to adopt “ecological reference points” to inform appropriate allocations of the resource.

In essence, ecological reference points determine the amount of menhaden that we need to leave in the water for predator fish, birds, and marine mammals. Then we decide who gets to harvest how many menhaden. This approach is the best chance we have of repairing the gaping holes in the marine food web that were caused by overfishing menhaden and other vital forage fish. Ecosystem-based fisheries management strategies such as this one are the best way to secure the health of our coastal and marine fisheries, and of the livelihoods like mine that depend on them.

On November 3rd, the Atlantic States Marine Fishery Commission (ASMFC) members will be meeting in St. Augustine to discuss a new amendment (Amendment 3) and make important decisions on what options to include in the first phase of Amendment 3. It is critical that they move ahead with developing ecological reference points for menhaden in this new amendment.

ASMFC should also include a wide array of options in this public information document, so that you have an opportunity to review and comment on them. In line with the recommendations of the Lenfest Forage Fish Task Force and other scientific studies, they should include in their list of options the choice to leave 75% of the unfished menhaden biomass in the water to provide for predator and ecosystem needs. (Check out this May 2015 ASMFC news release for more information.)

If you believe menhaden are a very important forage fish, do your best to attend the November 3rd meeting in St. Augustine. For more information on the conference and how to submit a public comment, click here.

Capt. Rodney Smith has guided on Florida's Space Coast for decades. He is the founder and former publisher of Coastal Angler Magazine. He is also a founding member of Anglers for Conservation.
View all posts by Rodney Smith →

3 comments on “The South Wants Our Menhaden Back”