It was one of those incredible fall days, September 30th, out of Brookings, Oregon. I really was “living the dream,” as so many of my friends tell me. I was on the lower Chetco River, an iconic salmon super-highway of large fish, some of the largest in Oregon, and the real fun was still a day away. 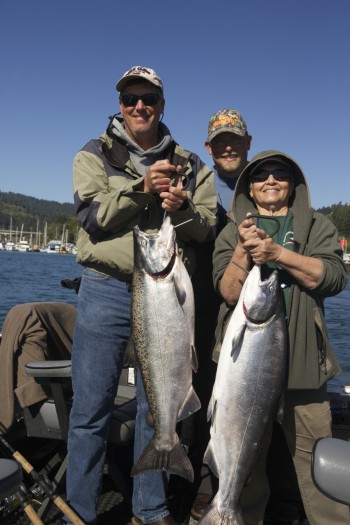 Stevie Parsons, Michael O’Leary and I were making what I hope will be a regular pilgrimage to the Chetco fishery, and in particular, the “bubble” fishery, where we’ve heard the stories of huge salmon caught every year at this time. Our guide, Andy Martin of Wild Rivers Fishing, put us onto two large Chinook in the mid-20 pound class. We caught them trolling herring just before and after high tide. We were restricted to the lower river on this day so we didn’t come into the fishery with very high expectations. As there had been no rain, there was really no reason for fish to be present. The ocean bubble was closed but slated to open the next day, October 1st, for what we anticipated to be an epic experience.

The three of us came down here on behalf of the Association of Northwest Steelheaders to gauge local interest on a proposed nickel mine in the Kalmiopsis Wilderness. It’s a pristine tract of land in SW Oregon that encompasses at least four key salmon bearing watersheds, including the Chetco system for which we were fishing. Needless to say, we were overwhelmed with the support we saw for protecting this incredible watershed. It’s ludicrous to think that the US Government could consider placing such a damaging proposal in an area that produces some of the last 40 and 50-pound wild Chinook salmon in the lower Pacific States. Simply put, due to the mining law of 1872 the federal government has to consider the proposal. I don’t think I need to tell you how popular an idea this is with the local fishing community.

So that was our night, presenting on the proposals, eating good pizza (yes, that really can exist on the Oregon Coast) and telling stories about how many huge salmon we plan to land on the opening day of the Chetco bubble fishery the next day. Well, at least the pizza was good.

There aren’t many days when I get excited to get up at 5:45 a.m. to be at the boat before sunrise. It was a rare day indeed, but the lure of my personal best Chinook was enough to get me out of bed, a bit excited, too. Dressed for harvest, we headed to our guide’s boat, Bill Monroe Jr., son of Bill Monroe Sr., the legendary writer for The Oregonian. Will we ever have a story for the Sunday edition now!

We quizzed Andy Martin endlessly the day before, hearing stories of 400 fish openers in recent years, two Chinook on at one time, likely at first light, and he factually stated, “There will be several 50-pounders landed in this 11-day fishery.” How can words like these not motivate an avid angler such as me? It was like Disneyland for grown-ups, except way, way better.

Crossing the bay entrance into the ocean had me on the edge of my seat. The horizon lit up with boats attempting to achieve the same benchmark that I was after. It was going to be a great day. There was a fleet of us there, fishing one to two foot seas, a dream in and of itself. It soon became clear, however, that this may not be the day that I had hoped. We should have seen 10 to 15 fish on all at once at first light, but we hardly saw a net wave. As the morning progressed, we knew we’d have to come back for that epic opener that was clearly not going to happen today.

Sometimes you scare the shark, sometimes the shark scares you.

We put in a full day, fishing poor Bill Jr. to his limit, but any day on one-to-two-foot seas is a good day. We saw some magnificent fish caught, and I’m not sure we’ve ever had such a diversified catch as we did today: a large, unidentified sculpin, three Pacific sand dabs, two dandy lingcod, a sea bass and even a 6-foot thresher shark. It’s beautiful on the Southern Oregon Coast, and I logged another fishery that I can say I participated in. After vacuum-packing the previous day’s catch, we’re hitting the road again, back to the northern country in hopes of finding Chinook again in the Tillamook fishery. After putting nine Chinook and 60 crabs in the boat on my Tuesday trip, I again am coming into the day with high hopes.

What it comes down to, however, is all that Oregon has to offer. From south coast Chetco River Chinook to a bounty of species to the north, wooded wildlands in the interior and pristine watersheds strewn throughout, how can one not appreciate the fascinating world we live in? It should have come as no surprise to me the level of anxiety felt in that pizza parlor last night; the mining companies will have to pry these fishing rods from our cold, dead hands. We fish because we have to. It’s no different than a kid exhausting his entire weekly allowance in the candy store, and anglers are becoming more unified in their approach to protecting our heritage. From what I’ve witnessed, folks from my industry treasure the social benefits of fishing over the financial rewards of it. It’s a true gift to get to make our living off of this incredible resource, but if you mess with our PTO (personal time off), you’re in for a fist-fight.