September is my favorite month of the year. Fall salmon, the last remaining viable run of wild fish, come back to our rivers and stage in our estuaries and the nearshore, where we have good access to them. Dinner-plate sized Dungeness crab are readily available, albacore are biting, elk are bugling, upland birds are flushing and the sun isn’t as intense as it has been all summer. The landscape is turning gold in color, and I’m very ready to work inside as the weather turns outside. It seems to happen nearly overnight. 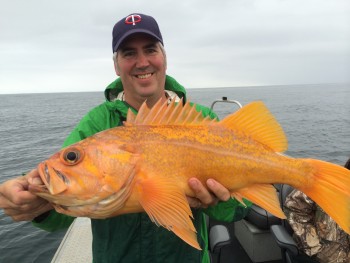 This year, the change became noticeable when our token August southern-influenced storm hit. When that system cleared, things were different; the lighting, the algae blooms, the water temperatures and migration patterns. And speaking of migration patterns, where are all the coho?

I had to re-look at the Columbia River coho forecast for 2015. The preseason prediction was for 777,000 returning adults. Earth to Fish and Wildlife, you were WAY off. OCN’s or Oregon Coastal Naturals’ (river bound), another 188,000 adults. It may be too early to tell about these wild coho, but the Columbia River run, no way.

These hatchery coho are what drives September and October excitement on the lower Columbia and the scores of tributaries where these fish return. Prepare to be disappointed. It is pretty awesome, however, to be fishing the ocean right now, catching great numbers of large chinook and having the ability to keep wild or hatchery coho. The shallow water off of the Long Beach Peninsula continues to deliver.

The lower Columbia left a lot of people happy in mid-August, with its record chinook harvest rates. So odd that it’s turned into a disappointment. I think it’s a foreshadow of what’s to come. We certainly appreciate Fish and Wildlife’s enthusiasm for healthy fisheries; it’s great for generating excitement and booking fishing trips and motel rooms. Inaccurate predictions and unmet expectations are a huge disappointment, however, creating a lot of angst in our community, making it hard to support an agency we so love. Our biologists have a hard job, trying to count fish. Aren’t they underwater? Are you kidding me? I’m thinking in the future, we’ll have to manage a bit more conservatively. Be prepared for that.

All it really takes, however, is another great day of fishing. Of course it can’t be that way every day. What fun would that be? When I see a full moon in September, I call it a harvest moon, whether or not it’s really called that. I read that this year’s harvest moon is September 27/28. It’s probably not irony that it falls during a peak period for north coast fall chinook. Be prepared for that, too.

As some of these Columbia River 20 to 30 pounders hit my fillet table this year, you can’t help but appreciate what they went through to get here. Their bodies seem so immense, likely because it’s been so long since I’ve seen a 40- or 50-pound chinook that were much more common just 20 years ago. We’ve seen whales in the lower Columbia in numbers we’ve never seen before, flocks of sooty shearwaters that number in the tens of thousands and, ironically, fewer pelicans than we’ve seen in recent years. It’s a dynamic ecosystem that, again, proven by this year’s lower Columbia coho prediction, no one has a grip on.

And speaking of change, we’ve lost a big name foot-soldier in our community. You’ll hear from much more qualified admirers than I on our recent loss of Zeke Grader. Amongst our tight-knit community of fish advocates, there is always someone to learn from. The level of knowledge and passion in leadership is noteworthy; Zeke was at the top of this list. As salmon and nearly every other fish stock has been depressed under our watch, we lurk in the cracks of policy, hiding behind our titles as Executive Directors or President, as if they carry some sort of weight in our fight against industries that compete for these limited resources. We represent industry, conservation and advocates, all collectively, but not so mightily. That too is changing however, as we forge relationships with Senators, Congressmen and Governors. We’ll have our turn at sausage making and because of people like Zeke Grader, we’ve held onto what we have, trying to turn a corner so our children have a chance at seeing what we saw as young adults. Thank you, Zeke, for your contributions to conservation and policy, your legacy will last FOREVER.

Yes, change is good and yes, change is coming, but if you haven’t gotten the theme of this week’s blog, it’s about change, be prepared for it.

Mark your calendars: Over the course of the next several months, you’ll hear more details about the Association of Northwest Steelheaders Family Fish Camp. It’s slated to run from the evening of January 15th through January 17th at the Friends Camp in Twin Rocks near Garibaldi, Oregon. If you want to learn how to fish on Oregon’s bounty, we’ll have the top-notch experts on how to catch this, how to dig that, how to process your catch and how to prepare it. You’ll also learn about the conservation programs we’re involved in and why we have to protect what we have left for fish and wildlife. We are still in the planning phases of the program but it’s one you won’t want to miss. Feel free to email me now to join our mailing list, we’ll keep you informed as we develop our program. Bob Rees at executivedirector@anws.org.