The reauthorization of the Magnuson-Stevens Fishery Conservation and Management Act that will dictate management of our nation’s fisheries for years to come is currently working its way through Congress. Much of the debate has focused on the effort to add more “flexibility” to rebuilding timelines (some flexibility already exists in the act). Unfortunately, a lot of other and, in my opinion, more pressing issues are receiving little to no attention. This is the first in a series of blog posts that will highlight some of the issues I feel should be addressed in the next version of this important legislation. 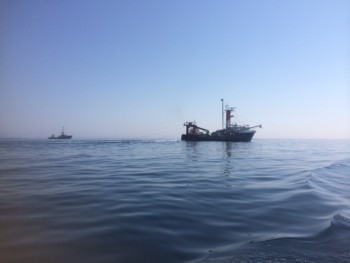 Two Atlantic Herring vessels towing a mid-water trawl between them off the back side of Cape Cod this summer. There is a small mesh net between these two boats. Photo credit: Capt Alan Hastbacka

As an example, lets take a look at a comparison between the Pacific hake (whiting) fishery that is managed by the Pacific Fishery Management Council (PFMC) & the Atlantic sea herring fishery managed by the New England Fishery Management Council (NEFMC). According to “Fisheries of the United States 2012”, in 2011 the Pacific hake fishery landed 347.2 million pounds valued at $47.1 million dollars and the Atlantic sea herring fishery landed 191.0 million pounds valued at $29.0 million. Although there are multiple gear types involved in either fishery, by far the vast amount of landings come from the use of an industrial sized fishing gear known as a mid water trawl (MWT).

Most of the MWT operations that fish for Atlantic sea herring also fish for Atlantic mackerel managed by the Mid Atlantic Fisheries Management Council (MAFMC). MWT is one of the most controversial gear types on the planet and its use is actually prohibited in many countries, including Canada. The massive net size combined with the small mesh required to harvest hundreds of thousands of pounds of a small target species in a single tow means that by-catch/incidental catch in these industrial fisheries is always of concern to managers. Monitoring of these industrial sized fisheries is essential and monitoring is where the comparison of these two fisheries goes in very different directions.

According to the NOAA Fisheries West Coast Region, since 2011 the Pacific hake fishery has been managed under a program that requires vessels have observer coverage at all times the vessel is at sea (100% coverage). Private third-party companies contracted by industry employ the observers. Simply put, industry pays for their observers. The Northwest Fisheries Science Center oversees the observer program and trains, certifies and equips catch share observers, ensures data quality, and stores, maintains and analyzes data collected by observers.

In New England and the Mid Atlantic, for over a decade there has been a community-wide effort to bring 100% observer coverage to the Atlantic sea herring and Atlantic mackerel fisheries for many of the same reasons that brought 100% monitoring to the Pacific hake fishery. To their credit, somewhere around 2012, during the development of the NEFMC’s Atlantic Herring Amendment 5 and the MAFMC’s Mackerel, Squid, Butterfish Amendment 14, the sea herring and mackerel industries stepped up to the plate and offered to pay a similar amount for observers just like the Pacific hake fishing industry does. Both the NEFMC and MAFMC included and industry funded 100% monitoring in their amendments and in 2013 the sections of each amendment that included those programs were rejected by NOAA/NMFS.

Although the reasons for the rejections are extremely complicated, at the heart of the rejections are the same “back side” costs to the Northeast Fisheries Science Center of training, certification, ensuring data quality, and analyzing data collected by observers that are provided by the Northwest Fisheries Science Center to the Pacific hake fishery. To put it in layman’s terms, the exact same management tools/services that are provided to the PMFC are too expensive to be provided to the NEFMC and MAFMC.

It is important to note that these two fisheries are at different stages of transitioning — or at least considering a transition — to electronic monitoring. However, whether it is by independent human observer or cutting edge electronic technology does not change the point of this blog; the law should mandate that tools provided to one regional management council should be available to all of the management councils.

Admittedly, these comparisons are complicated and technical. Managing multi-million-dollar fisheries is always complicated and technical. What is not or at least should not be technical is the concept of equality and fairness amongst the tools provided to the management councils. It will be easy for aggressive lawyers that want low accountability for East Coat industrial fisheries to shoot holes in my example. Trust me, this is not the only example I could use. It will be similarly easy for NOAA/NMFS public relations professionals to point out line item budget use restrictions and other financial and legal reasons that management tools available to the PMFC are not available to the NEFMC and MAFMC.

This is EXACTLY my point. The next reauthorization of our nation’s fisheries law should ensure that all of the regional management councils are working with the same toolbox. Simply put, what is good for the West Coast should be good for the East Coast, the Gulf of Mexico and everywhere managers work hard to struggle with the balance of feeding a nation, maintaining jobs and preserving our natural resources for many years to come.

1 comment on “Coast to Coast, MSA Must Provide Similar Tools to Manage All Fisheries”