August 1st marked the opener of the Buoy 10 season; it’s the time of year that all Pacific Northwest anglers wait for. The fishery likely offers the best chance at a freshwater caught chinook or coho salmon in the entire region, and with about 1.7 million of them coming back, you can understand why the day attracted crowds of people. 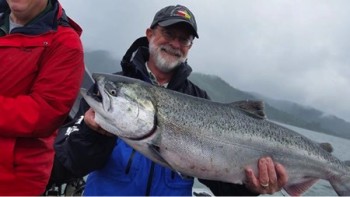 Ian Fergusson of the Association of Northwest Steelheaders with a Buoy 10 Chinook Salmon caught near Astoria, Oregon.

August 1st isn’t typically a great day to fish as it’s a bit early for chinook and way early for coho to start showing at the mouth of this mighty river. Nonetheless, with the tide cycle the way it was and only a few known numbers of chinook in the river, anglers were looking for alternatives. Coho salmon did start showing eerily early in the summer chinook fishery several miles upriver, maybe an indication of a whopper run?

Well, if you’re coho fishing, especially right at the Buoy 10 deadline just about a mile from the river mouth, you have one sure bet thing to look forward to: “The Rip.” It’s where the river meets the ocean, forming a definitive line between ocean and river influenced water. On one side of the rip is cool, ocean sea-water, fraught with baitfish. On the other, about 150 boats with porcupine quills sticking out, waiting for their fresh anchovy baits to fold over and start ripping line with an acrobatic coho on the other end. Sure as heck, about one-and-a-half hours after low slack, here came the rip, in all its frothy water, seaweed clusters and diving sea-birds, right on time. Surely this was going to get good.

The second the rip passed underneath our boat, our rods started to pop off. Just as if someone turned on a light switch, three rods buried to the water, with coho’s jumping, crossing lines and getting reeled to the boat. We were using barbless hooks, mind you, so we would be lucky with all the air time these coho provide if we landed one-half of the fish we hooked. Sure as heck, two of the three fish hit the deck and we were on the board!

It didn’t last long, however, as the best action happens right when the rip hits. The ongoing influx of ocean water, however, continued to bring in our target species, and along with it, plenty of forage fish. With the tides as strong as they were, all pelagic ocean life got swept into the big river mouth for this incoming tide; it was futile to fight it. But one had to wonder, why would these coho be here if there is a vast ocean in which they can forage and not have to come into a harsher freshwater environment, especially so early prior to their spawning run?

It may just be a diminishing forage base. Commercial sardine seiners have been sidelined this year; a depleted population of sardines will keep the fleet from fishing anywhere on the West Coast this year. Yes, this population is cyclical, but it’s supposed to cycle every 50 years, not after the first 10 when the fishery was supposed to be managed conservatively. Anchovies are on the decline as well. The river used to be choked with them, so thick that they’d be hitting our lines on the incoming tide to the point we’d have to move just to feel like we had a chance at a bite without so much competition.

The ocean is changing, and we have to change with it. Talk of the warm water blob extending from the Gulf of Alaska to the Mexico/California border is certainly concerning, but couple that with a defined El Nino event AND lethally warm water temperatures in our inland waters, and we’re in for tough times ahead.

The coho don’t look as robust as they normally do, there are fewer brown pelicans diving in the Columbia River estuary and forage fish are clearly not as plentiful as they normally are. Yeah, we’re in for tough times ahead.

It’s a dynamic ocean out there, way bigger than a team of scientists or conservationists. I used to say that repairing our freshwater ecosystems was totally within our responsibility because that’s really the only ecosystem that we have some measure of control over. The ocean is too vast and we’re not building infrastructure on it anyway, wreaking havoc on its function. Well, it wasn’t long until I was educated on how we had our finger in that mess as well. Carbon pollution, agricultural run-off and over-harvest; yeah, we’re to blame here, too.

Thankfully, people are paying attention to these issues. They are educating us and we’re slowly changing our ways, but it’s been a long time and a heavy footprint. We have a long ways yet to go, and we all have a responsibility to do what’s right. We can all be prepared for a major shift in our Northwest Fisheries, but more importantly, we must be prepared to modify the way we live if we want to see our salmon runs maintain the way of life we’re accustomed to.