I’ve been raving about the fluke (summer flounder) fishing for several years now. Because it’s been pretty darn good! I mean, it’s basically been a completely different fishery than it was 10 years ago. Simply put, there have been dramatically more and larger fish around, up until fairly recently anyway. 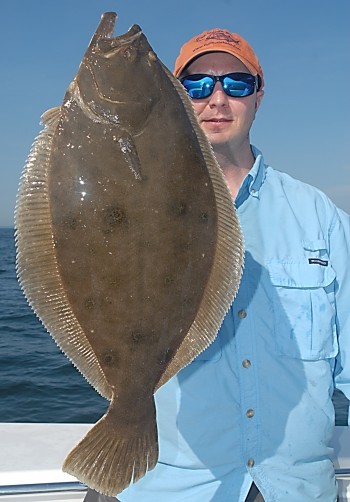 It certainly wasn’t always this way. In the mid-90s, when I first came up here, and the size limit was a mere 14″, you pretty much had to bust your rear to catch fish so small you could actually see through them when you held one up to the sun. It really sucked trying to fillet a bunch of those. Up until maybe 6 or 7 years ago, you still had to run a couple of miles offshore and fish in 40 to 60′ with a 6oz bank sinker and a heavy rod/reel to catch a real fish. Not all that fun in my book. And it really excluded all those guys that either fished from shore, or were restricted to the bays.

This all changed though… for a few reasons. First, there were major changes in federal fishery management law (the Magnuson Stevens Act) in 1996 that required federally managed species be rebuilt in a definitive time frame (10 years, unless the biology of the species prevented that). Then in 2006 a reauthorization of the law put in accountability measures that ensured such rebuilding was actually taking place, year by year. I suppose the real defining turnaround though was when NOAA got sued for trying to implement a plan that gave the summer flounder stock a mere 18% chance of rebuilding. That pretty much kicked the summer flounder recovery in gear.

Unsurprisingly, there was a ton of pushback from the commercial side during rebuilding, but it was charter/party-boat fleet that really tried to stall things as size limits rose and bag limits shrunk. Seems like not many of those guys acknowledge that more people fish when the fish are abundant and the fishing is good, despite the fact that it’s absolutely true.

Fortunately, the Mid Atlantic Council and NOAA Fisheries held their ground, mostly because they were required by law, and summer flounder was declared “rebuilt” in 2012. As a result, from 1989 to now, NOAA estimates a 700 percent increase in the amount of fluke landed by anglers. Recreational trips over the last decade are up over 40 percent. In the Mid-Atlantic alone, rebuilding of the summer flounder stock brought in an additional $1.4 billion in economic activity and supported 18,660 jobs. It’s an unequivocal success story for both the fish and anglers.

HOWEVER… the fishing has kinda sucked this year, and it wasn’t great last year either. Yeah, this is just an observation from a single guide/angler, but just from reading the reports, this seems to be fairly consistent pattern from Virginia to Rhode Island. Yes, I’m sure there are some spots in-between where anglers are “killing it,” experiencing “epic” fishing, etc., but the general coastal trend seems to be a decline in the number and size of fish encountered.

Recent summer flounder science bears this out. Based on a 2015 stock assessment update there appear to be substantially less fish around than there were just a few years ago. 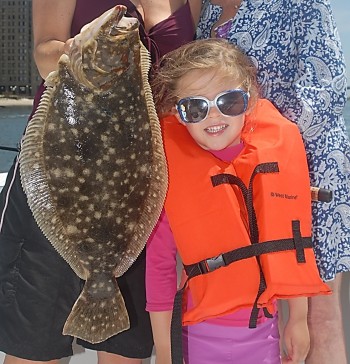 Why? Well, I should first point out that it doesn’t appear to be due to fishing/overfishing. Catch in recent years has not been substantially over the “Acceptable Biological Catch,” (ABC) a cap set by scientists to avoid stock depletion.

The bulk of the problem appears to be “poor recruitment,” which is a sciencey way of saying that from 2010 to 2013, there were well below average spawns. Why that might be the case is anyone’s guess, but historically “recruitment” goes up and down. That said there is evidence of substantial illegal harvest in recent years from both the commercial and recreational sides, which probably contributed. But still, we can’t really blame this all on fishing.

Regardless, we are no longer at that “rebuilt” high-level of fluke abundance. According to NOAA’s Science Center, we are at about 65% of where we should be.

This should not come as a surprise really. In the real world populations naturally fluctuate. During those down cycles, even while it may not be due to overfishing, it just makes sense that we should reduce fishing mortality on that stock right? Because there are less around, you don’t want to pound on them at the same levels as when there are a lot of them around. Unfortunately there are a lot of people who don’t think so. But fortunately, current fisheries law rightfully requires a reduction in such cases.

And so, the Mid Atlantic Council staff sent out a memo in mid-July recommending a 43% reduction in fishing mortality. And then, the panic started, and with it, some calls to weaken federal fisheries management law so that we can avoid belt tightening in the future when stocks dip.

A few things to note here (warning, I might get a little into the weeds, but it’s necessary to understand the situation). First, the rallying cry from those who wish to weaken the conservation provisions of federal fisheries management law is “flexibility in rebuilding timelines.” But whether they understand it or not, such “flexibility” – basically drawn-out rebuilding timelines – wouldn’t change things here. While yes, NOAA has determined that at the current levels we’re fishing we may be technically “overfishing,” the stock still isn’t “overfished.” In other words, it’s still considered “rebuilt,” so there is no “rebuilding timeline,” hence nothing to drag out.

Second, yes, we exceeded the Acceptable Biological Catch (ABC) by some, but we didn’t exceed the Over-Fishing limit (OFL). 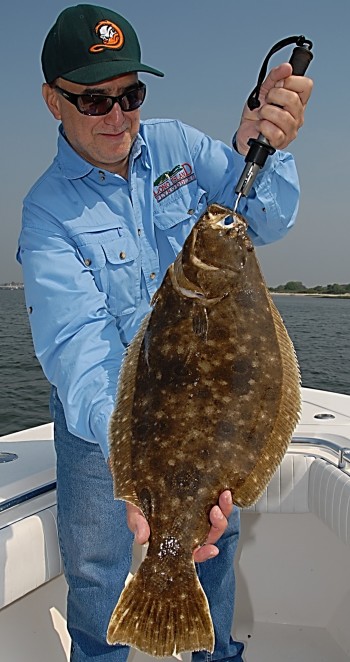 Let me explain… Scientists determine an Over-Fishing Limit, then reduce that number a certain percentage for “scientific uncertainty.” In other words the law requires an overfishing limit buffer, which varies depending on how much confidence biologists on the Scientific and Statistical Committee (SSC) have in the science. In this case that buffer is 8%. To put it another way, the Acceptable Biological Catch is 92% of the overfishing limit.

So yes, with summer flounder we were indeed fishing over the Acceptable Biological Catch, but not over the Over-Fishing Limit. Yes, weeds, but the overarching point is that the sky is not really falling here.

Still, the goal is to not exceed the Acceptable Biological Catch, so some reductions are required. Yes, a 43% reduction in one year is drastic, especially given we didn’t exceed the Over-Fishing Limit. Mid Atlantic Council staff immediately acknowledged that, and began working on a solution.

What they came up with is a more benign three-year phase-in reduction. A 28.6% reduction in 2016, then another reduction of 2.5% in 2017 and another 1% in 2018. So basically we’re going down 30% and staying there over the course of three years, instead of taking a big reduction up front.

Of course we may go back up as we get into the later years. Managers will reassess if we get better recruitment (read: spawning) numbers. 2014 recruitment appears to be closer to average. If it’s better in 2015 and 2016, we’d be well within the law to increase annual catch limits.

So what now? Well, the Mid Atlantic Council will meet next week to discuss all of this. Yes, there will be some pushback on any reduction, but I suspect we’ll approve the staff/biologists’ recommendation and go with the above three-year phased-in reduction.

While it isn’t 43% in one shot, we may still be looking at a substantial reduction next year, which could mean a real reduction in bag limits/increase in size limits. If that’s the case I do hope the regions are sensible enough to not tweak the seasons, as I feel like most people will fish regardless of size and bag limits if the season is at least open.

It’s worth noting here though that any changes to the regulations won’t be considered until December. And any reduction will be determined from what we were allowed to catch (Annual Catch Limit-ACL), not what was actually caught this year. Because of the aforementioned below-average recruitment, and the resulting slow fluke fishing situation, I kinda expect/hope landings won’t even be close to the annual catch limit. IF that’s the case, the region might not have to change the regulations all that much, possibly not at all. Guess we’ll see how it shakes out.

At any rate, the point here is that the situation we’re in with fluke right now isn’t all that bad in my opinion… although if you’ve been reading any of the newspaper articles on this you wouldn’t know it. The “sky-is-falling” and “this-is-a-good-example-of-why-we-need-flexibility” (read: perpetual overfishing) crowd is just wrong.

If anything, I think the fact that we have the flexibility to adopt a somewhat riskier track when faced with the current situation — and may phase in a reduction that has caused some economic angst in some regions — speaks volumes. I think this situation shows that reasonable flexibility in the law already exists. We can bend, while still conserving the stock.

But advocates of “flexibility” in the Magnuson-Stevens Act, whether they say it or not, just want to be able to kill more fish even when stocks are down. While they claim to want “reasonable access,” what they really want is freedom to overfish when it suits them and their business interests. What they don’t take into account are the rest of us who depend on rebuilt abundant stocks to be successful.

For me, the real take home with all of this is: Current law is working exactly as it was intended to work. It absolutely makes sense. When the stock dips, reduce fishing mortality. Regulations change. This ensures the continued viability of the fishery during ups and downs in abundance. What’s so terrible about that? Yes, consistent regulations would be nice, but nothing is constant in the natural world.

But it all gets so badly distorted in the press. We’re somehow putting people out of work because they can’t kill more fish than the biologists are telling us we can.

It’s irritating, man. And given the fluke fishing crowds these days, it just doesn’t appear to be true.

3 comments on “And the Fluke Hits the Fan: With Summer Flounder, is it Really Time to Panic?”