Wait on ‘em Stevie, wait………..hold on……….hold on………. Okay, get him! It can often take a great deal of patience to catch a sturgeon. They’re not aggressive biters but fishing in the lower Columbia River estuary, where there are thousands and thousands of the beasts, is very exciting!

This fishery is world-class, but you wouldn’t know it by the absence of interest. We had this spot and the nearby 4 square miles, all to ourselves. Ever since the Department of Fish and Wildlife from Oregon and Washington decided to make the lower river below Bonneville dam catch and release only, the crowds disappeared, and so did the economic benefit. That was the decision that put me behind a desk versus on the water, where I’ve been the last 19 years as a professional fishing guide.

I don’t have a lot to complain about though, since I love my job. I just spend more time protecting fish than harvesting them but this story isn’t about me. Stevie caught that slow-biting fish, but more important to her, she brought her brother out fishing to show him why she lives here. Stevie and Rick are both native Hawaiians. Stevie will never go back to Hawaii but subscribes to her Hawaiian heritage that if you take something, you give something back. She’s one of our top volunteers for the Association of Northwest Steelheaders. 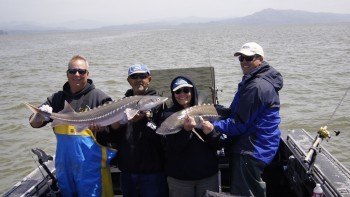 Pro guides Andy Betnar (Far left) and Bob Rees (Far right) with Stevie Parsons (right) and her brother Rick with a double! These sturgeon were caught and released, along with several others, on fresh anchovies from the Columbia River.

But this story isn’t about her either. It’s about these magnificent sturgeon that have eked out a living on Planet Earth for the last 200 million years; yes, that’s way before the dinosaurs ruled the earth. It just goes to show you, only water is capable of harboring legacy.

But even this resilient species can fall prey to human development. We’re sitting on the sidelines, barred from a consumptive fishery that I built my business on. Yes, reality check sets in. But this is a resilient critter; we’re assured that the chance of this fish going extinct is very, very low. Is that something I really care to bet on? This fishery is being managed very conservatively and most of us are OK with that.

Biologists and our citizen-appointed commissions are the ones who recommended this action. Department staff however is saying some consumptive opportunity would likely not compromise recovery efforts. They take a look at sturgeon abundance on an annual basis, and when they made the recommendation, the population was on a downward trend, a significant one. Well, guess what? Yes, they are a resilient species. Once the number of returning spawning adults of euchalon smelt, or as native Americans called them, candlefish (they’re so oily that natives used to dry them and use them for candles during the long winter nights), started showing a dramatic rebound, so too, the sturgeon came back to forage in the lower Columbia River.

As it turns out, these smelt are a critical source of food for sturgeon in the winter months. So much so, that their entire growth for the year is based on this winter food source. These adolescent sturgeon, fish between 30 and 60 inches, go where the food is. If there are low populations of smelt returning to the river, they’ll find winter forage in other estuaries up and down the Pacific Coast, in and out of other estuaries. Did I say they’re resilient?

So while I sit sidelined here, waiting for better indicators that sturgeon are on the rebound, I’ll continue to advocate for a conservative approach for all stocks of food fish, no matter what their status is. It seems someone, somewhere in the world, is going to want to get after that population of fish. I feel fortunate that our Pacific Fishery Management Council recently took a proactive approach to unmanaged forage fish species in our region.

It won’t be long before fish processors are looking to our local stocks of forage to feed an ever-growing market for fish meal or fish oil; what a waste of our natural resources. Scientists have shown that a net full of forage species such as saury or smelt, is worth twice the economic benefit left in the water, feeding our salmon, sturgeon and an array of other species, versus shipped overseas to feed net pen raised bluefin tuna in Australia. It doesn’t matter how resilient you are, the math simply doesn’t work out.

Most of us believe our fishery managers are doing the best job that they can with the resources they have to work with. We all agree that we have to balance the needs to fish-dependent communities with the needs of future generations of the species and fishermen, but who really wants to take the fall for compromising 200 million years of success? Count me out……..