So many of us take for granted the role baitfish play in the success of our typical fishing trips. Whether you’re pursuing salmon, bottomfish, sturgeon or tuna, baitfish, both size and species, play a huge role in what ends up in the creel at the end of the day.

A Tale of Two Fishing Trips 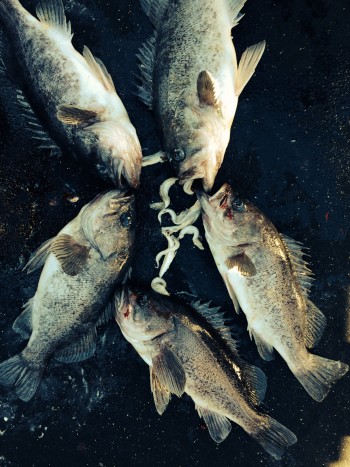 Recently, on what had been an unprecedented calm winter ocean, I made several productive trips down to Three Arch Rocks out of Garibaldi, Oregon. A quick check of the bar conditions and a trust of the short-term ocean forecast inspired me to leave the port at a leisurely 8:30 a.m. start. Thankfully, rockfish don’t seem to mind what time we leave the dock to pursue them.

As we passed through the occasional raft of sea birds, oddly, there were no pelicans in sight like we usually see in the summer. It turns out the pelicans were down south, likely south off Southern California, feeding on winter forage. As we approached our destination near Three Arch Rocks off Oceanside, we came into much denser numbers of other seabirds taking advantage of schools of baitfish. Rockfish spend most of their lifecycle around the rocky structure that draws in forage species such as herring, anchovies and sand lance. It also offers protection and spawning habitat.

Before we knew it, my guests Stevie Parsons and Pat Vining were into doubles and triples of hungry sea bass. As these swimming fish tacos got reeled to the surface two and three at a time, I couldn’t help but wonder about the abundance of this resource; it must be limitless, I imagined. Of course we all know that’s certainly not true. And, as we pounded out our 21-fish limit (plus one lingcod) in about 45 minutes, we headed for port, where the real work begins. I’m not just talking about filleting the fish… I had scores of tiny baitfish carcasses to try and wash out of my boat as well. When these sea bass hit the deck, out come their swim bladders and thus their stomachs, where hordes of partially digested baitfish come with it. As I would discover on my next trip just two weeks later, baitfish was the key to our success.

That next trip, I took a larger load of my friends and it took us 6 hours to catch just 36 sea bass. Why was one trip so productive and the other relatively futile? The answer came to me when I went to the boat wash. There was no baitfish mess to clean up. The key component to our success was glaringly absent on this adventure. Thankfully, that doesn’t happen on every trip.

As you’ll hear most experienced anglers convey, there is something to learn from any and every fishing trip, if you pay attention. Last summer, the ocean ecosystem gave us much to learn. We all knew that the Buoy 10 fishery was going to be one to behold. For those who couldn’t contain their excitement, we came up early and targeted the abundant salmon staging just off the mouth of the Columbia, to the north along the Long Beach Peninsula. The fishing was nothing short of epic, and it lasted the entire season. Why was it so productive for so long? The baitfish were present, and in numbers I have never seen before!

I’ve been through my share of anchovy hordes on the lower Columbia. Schools so thick that you can no longer see the bottom of the river because the school of baitfish has the fish finder screen blacked out, so thick that your rod tips are quivering due to anchovies hitting your line. Indeed an incredible sight, yet confidence-draining that your plug cut herring could “outcompete” the millions of other baitfish surrounding your boat. When I saw the schools of baitfish in the nearshore off Washington’s coast, it was stunning. It was pretty easy to see why limits were achieved in short order here last summer.

You’ll hear from the old-timers to look for the schools of birds to find the feeding salmon in the ocean. While this works often, it doesn’t work always. It is a good rule, but the baitfish were so dense this summer that the birds didn’t even want to look at them anymore.

These dense schools of feed not only improve survival, but they also allow salmon to put on immense size in their tenure at sea. Most of us realize that the days of 40-pound chinook are much more rare than they were 20 years ago. We have to look to our scientists to help determine why this is and what we need to do to correct it. I’ve only taken two chinook over 40-pounds from the Columbia River in my 20-year history, my most recent one with avid angler Bob Keerins off the Long Beach Peninsula in August of 2014. 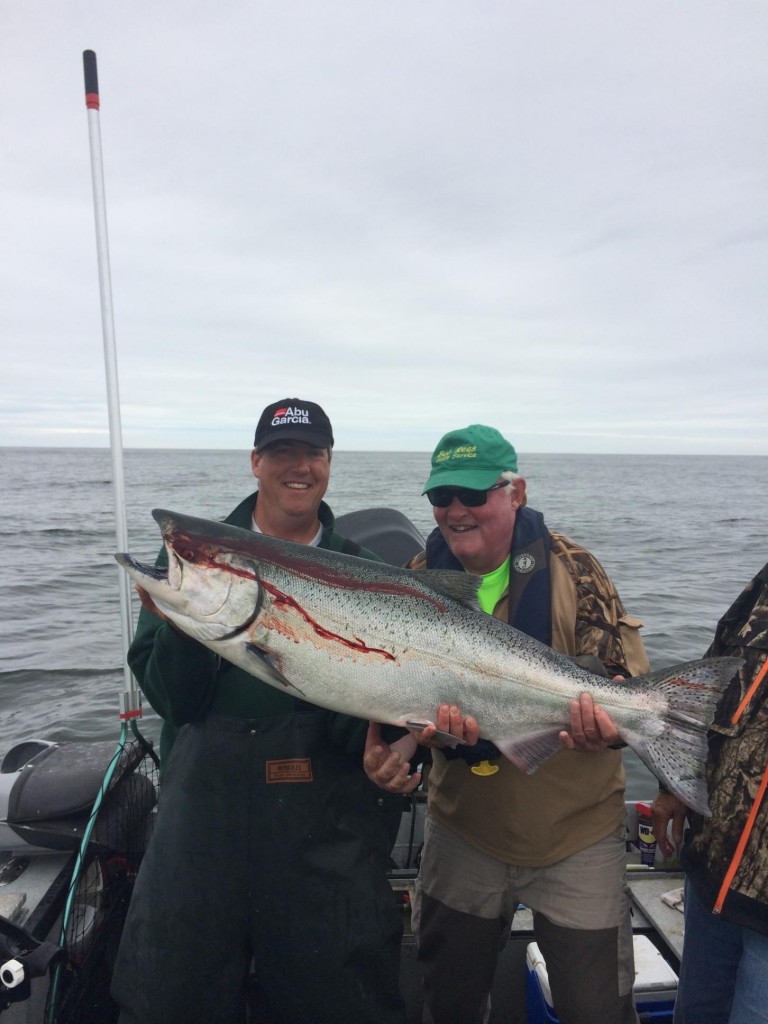 Bob Keerins of Portland with a 43-pound chinook taken off the Long Beach Peninsula. August 2014.

Manage for Today and for Tomorrow

Our nation’s fisheries are governed by the Magnuson-Stevens Act, and Pacific Coast anglers feel adherence to this law has brought back economically important species from near collapse.

Most of us understand that it’s not going to be peaches and cream every year for our Pacific Northwest salmon runs. That’s why it’s more important now than ever before to learn from the past and manage for the future. In a unanimous decision this March, the Pacific Fishery Management Council agreed to protect unmanaged forage species in federal waters (3 to 200 miles offshore) so that developing fisheries would have to go through many hoops before jumpstarting a commercial fishery. It seems like a small step but it’s a very important one to keep the worldwide trend of overfishing at bay.

Most of us understand that it’s not going to be peaches and cream every year for our Pacific Northwest salmon runs. That’s why it’s more important now than ever before to learn from the past and manage for the future.

Our nation’s fisheries are governed by the Magnuson-Stevens Act, and Pacific Coast anglers feel adherence to this law has brought back economically important species from near collapse. For too many years, a continued depressed status of some stocks and the collapse of previously thriving coastal communities steered stakeholders in the wrong direction. As reauthorization of Magnuson-Stevens nears in Congress, user groups must remain diligent in protecting the measures that have brought us success. In order to recover these collapsed stocks, we must adhere to the best available science and manage conservatively until fishermen can take advantage of recovered species.